The delivery of pharmaceutical care by telecommunications — telepharmacy — is still in its infancy. Scott Dalgliesh reports from a session where pharmacists shared their learning.

One of the early adopters of telepharmacy was the US Navy. Commander Angie Klinski presented the results of changes to pharmacy services designed to meet the requirements of the 2004 US Joint Commission for pharmacist review of all prescriptions before dispensing. The extensive geographical reach of the US Navy means that the physical presence of a pharmacist at all locations where medicines are supplied is impossible. Telepharmacy builds on a hub-and-spoke model where support pharmacists can verify prescriptions dispensed by pharmacy technicians in real time. Early proof-of-concept work showed that telepharmacy enabled one of the test sites to increase the percentage of prescriptions checked in less than 20 minutes from 67% to 100%, Commander Klinski said. She went on to outline the range of measures used in the evaluations and some key technical and process improvements needed, particularly reducing some of the hardware components of the system, rebalancing workload across sites and locating the support pharmacists more centrally. 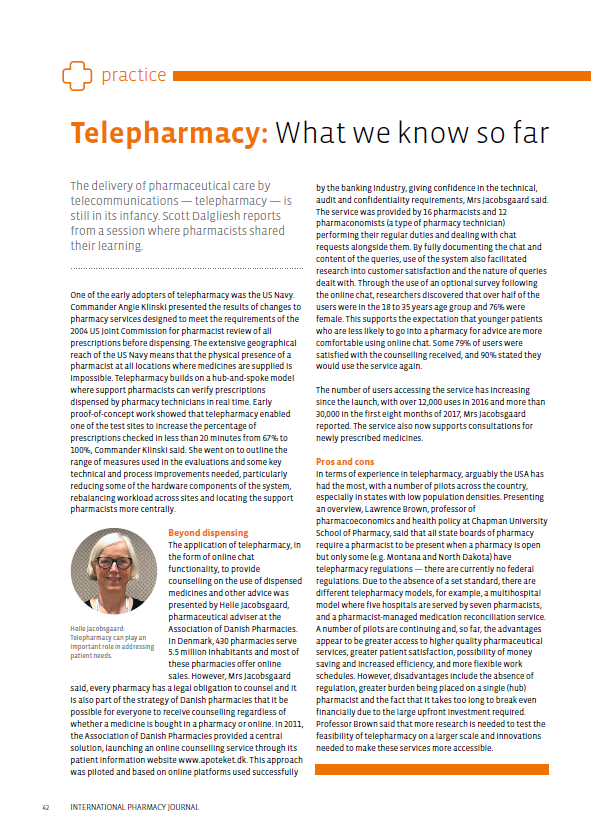 The application of telepharmacy, in the form of online chat functionality, to provide counselling on the use of dispensed medicines and other advice was presented by Helle Jacobsgaard, pharmaceutical adviser at the Association of Danish Pharmacies. In Denmark, 430 pharmacies serve 5.5 million inhabitants and most of these pharmacies offer online sales. However, Mrs Jacobsgaard said, every pharmacy has a legal obligation to counsel and it is also part of the strategy of Danish pharmacies that it be possible for everyone to receive counselling regardless of whether a medicine is bought in a pharmacy or online. In 2011, the Association of Danish Pharmacies provided a central solution, launching an online counselling service through its patient information website www.apoteket.dk. This approach was piloted and based on online platforms used successfully by the banking industry, giving confidence in the technical, audit and confidentiality requirements, Mrs Jacobsgaard said. The service was provided by 16 pharmacists and 12 pharmaconomists (a type of pharmacy technician) performing their regular duties and dealing with chat requests alongside them. By fully documenting the chat and content of the queries, use of the system also facilitated research into customer satisfaction and the nature of queries dealt with. Through the use of an optional survey following the online chat, researchers discovered that over half of the users were in the 18 to 35 years age group and 76% were female. This supports the expectation that younger patients who are less likely to go into a pharmacy for advice are more comfortable using online chat. Some 79% of users were satisfied with the counselling received, and 90% stated they would use the service again.

The number of users accessing the service has increasing since the launch, with over 12,000 uses in 2016 and more than 30,000 in the first eight months of 2017, Mrs Jacobsgaard reported. The service also now supports consultations for newly prescribed medicines.

In terms of experience in telepharmacy, arguably the USA has had the most, with a number of pilots across the country, especially in states with low population densities. Presenting an overview, Lawrence Brown, professor of pharmacoeconomics and health policy at Chapman University School of Pharmacy, said that all state boards of pharmacy require a pharmacist to be present when a pharmacy is open but only some (e.g. Montana and North Dakota) have telepharmacy regulations — there are currently no federal regulations. Due to the absence of a set standard, there are different telepharmacy models, for example, a multihospital model where five hospitals are served by seven pharmacists, and a pharmacist-managed medication reconciliation service. A number of pilots are continuing and, so far, the advantages appear to be greater access to higher quality pharmaceutical services, greater patient satisfaction, possibility of money saving and increased efficiency, and more flexible work schedules. However, disadvantages include the absence of regulation, greater burden being placed on a single (hub) pharmacist and the fact that it takes too long to break even financially due to the large upfront investment required. Professor Brow