If individualised therapies are to become a reality, manufacturing will need to adapt to produce customised formulations. Jhinuk Rahman reports from a PSWC 2017 session on how this might be achieved.

Pharmacy has moved from patient-centric manufacturing in pharmacies to a “one-size-fits-all” approach provided by industrially produced medicines. But in the future, practice will become much more customer-focused and patient-oriented again. So said Staffan Folestad, from the Pharmaceutical Technology and Development Department at AstraZeneca, Sweden, indicating that personalised and precision medicine will be the basis for the next huge wave of improvements in health outcomes. 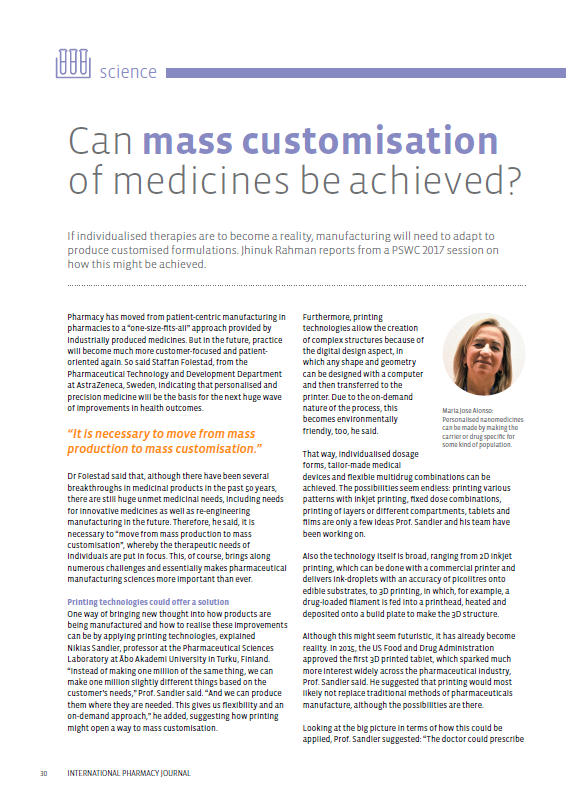 Dr Folestad said that, although there have been several breakthroughs in medicinal products in the past 50 years, there are still huge unmet medicinal needs, including needs for innovative medicines as well as re-engineering manufacturing in the future. Therefore, he said, it is necessary to “move from mass production to mass customisation”, whereby the therapeutic needs of individuals are put in focus. This, of course, brings along numerous challenges and essentially makes pharmaceutical manufacturing sciences more important than ever.

Printing technologies could offer a solution

One way of bringing new thought into how products are being manufactured and how to realise these improvements can be by applying printing technologies, explained Niklas Sandler, professor at the Pharmaceutical Sciences Laboratory at Åbo Akademi University in Turku, Finland. “Instead of making one million of the same thing, we can make one million slightly different things based on the customer’s needs,” Prof. Sandler said. “And we can produce them where they are needed. This gives us flexibility and an on-demand approach,” he added, suggesting how printing might open a way to mass customisation.

Furthermore, printing technologies allow the creation of complex structures because of the digital design aspect, in which any shape and geometry can be designed with a computer and then transferred to the printer. Due to the on-demand nature of the process, this becomes environmentally friendly, too, he said. That way, individualised dosage forms, tailor-made medical devices and flexible multidrug combinations can be achieved. The possibilities seem endless: printing various patterns with inkjet printing, fixed dose combinations, printing of layers or different compartments, tablets and films are only a few ideas Prof. Sandler and his team have been working on. Also the technology itself is broad, ranging from 2D inkjet printing, which can be done with a commercial printer and delivers ink-droplets with an accuracy of picolitres onto edible substrates, to 3D printing, in which, for example, a drug-loaded filament is fed into a printhead, heated and deposited onto a build plate to make the 3D structure. Although this might seem futuristic, it has already become reality. In 2015, the US Food and Drug Administration approved the first 3D printed tablet, which sparked much more interest widely across the pharmaceutical industry, Prof. Sandler said. He suggested that printing would most likely not replace traditional methods of pharmaceuticals manufacture, although the possibilities are there. Looking at the big picture in terms of how this could be applied, Prof. Sandler suggested: “The doctor could prescribe a certain medicine after making a therapy plan based on diagnostics and the industry could produce drug-loaded filament as product delivered to hospitals, for instance, or edible substrates and ink cartridges containing the drug that we want to dose. The hospital could then print according to the patient’s needs and give clinical feedback.” Maybe even pharmacies could use cheap inkjet printers to print onto edible icing-sheets, especially for paediatric applications, bringing the technology closer to the patient. “Still, this is by no means a straightforward process”, he warned. Finding the right ink-formulation or drug-loaded filament, clogging print-nozzles and many other challenges are faced during manufacturing. Alvaro Goyanes, development director at FabRx Ltd, UK, and 3D printing expert, agreed with this sentiment. “3D printing has revolutionised patient-specific hearing aids. . . . Today all hearing aids are made by 3D printing,” said Dr. Goyanes, exemplifying the potential of this technology. Personalised objects such as prosthetics or wound dressings can be made fairly easy by scanning the patient’s body part and creating a digital model on the computer. Even an iPad could be able to make the scans, highlighting the simplicity of the process, he said.

“Printlets” — what Dr Goyanes calls 3D-printed tablets and capsules — can come in different colours, sizes, drugcombinations and drug-release properties, depending on experimental parameters such as polymers, structures or infill-level of the product. Variations, especially in geometry and colour, could increase patient acceptability. But processes like these take time. “It took 20 years to get from the technology to the product,” Dr Goyanes said. Nevertheless, he believes, it is only a matter of time until companies will manufacture patient-tailored batches, because the need as well as the technology are there.

Another approach to individualised therapies was introduced by Maria Jose Alonso, professor of biopharmaceutics and pharmaceutical technology at the Department of Pharmacy and Pharmaceutical Technology, University of Santiago de Compostela, Spain. She designs nanopharmaceuticals that overcome biological barriers. These new delivery carriers, which have a size from 50– 300nm, consist of a liquid or solid core and an outer shell, and can be modified, for example, through surface charge or functionalisation of the surface with target ligands. “Assembling the different layers with the core can be done in situ on demand at any level,” Prof. Alonso explained. Personalised (nano)medicines can be made by making the carrier or drug specific for some kind of population. The process itself can be as easy as mixing the individualised drug with a nanocarrier, even in a hospital or pharmacy. Currently she is working on applying the particles in the areas of oral drug delivery, intranasal vaccinations, ocular drug delivery and cancer treatments. In cancer therapy, Prof. Alonso and her laboratory were able to design multifunctional polymeric nanocapsules that target different tissues and cell populations, making treatment more efficacious, less toxic and less prone to the development of drug resistance. In the assessment of the tissue targeting capacity, she found drug concentrations “more than 37 times greater than the commercial product with non-targeted delivery carries”, she said. By facilitating intracellular targeting using specific nanocapsules that are easy to produce on demand, she predicts a paradigm shift in cancer therapy. Overall, there is much on the horizon for individualised therapies and manufacturing sciences will continue to be a big part of it.

News • 14 December 2021 A new handbook on management of colds, influenza and sinusitis aims to support pharmacists and health systems