Members of the Pharmaceutical Society of Australia (PSA) celebrated World Pharmacists Day across the country and the PSA shared a special message from the New South Wales Chief Health Officer Kerry Chant.

The Bulgarian Pharmaceutical Union raised awareness of World Pharmacists Day on prescription bags and achieved front page coverage in the national newspaper 24 Chasa. In an opinion piece published in the newspaper, Venelin Sapunarov, as one of the representatives of the union, advocated the value of pharmacists and took the opportunity to highlight issues such as pharmacist salaries and other rights, prescription costs for patients and the need for electronic prescribing. The information was also published on other online news sites. The Bulgarian Pharmaceutical Union also organised and broadcast a press conference on 25 September.

The Canadian Pharmacists Association highlighted that Canadians recognise the need to expand and fund additional health services in communities. They also shared the finding of a new survey that 90% think pharmacists can help address gaps in care caused by the current shortage of health providers.

We thank a number of pharmacy leaders in Taiwan for supporting this year’s campaign by becoming #WPD2022 champions. Special thanks to Jack Chen, director general of the Taiwan Society of Health-System Pharmacists and for providing translations of materials in traditional Chinese.

The French Chamber of Pharmacists highlighted the service of the profession to public health and Pierre-Olivier Variot, president of the French Community Pharmacists Union penned a WPD blog outlining three ideas that could be implemented quickly to advance the profession.

Coverage of World Pharmacists Day by the national media was accomplished by the Pharmaceutical Society of Ghana and its regional branches, which held a number of events, across the country, from engaging the media on specific topics such as obesity to giving health talks and performing screening for diseases.

We thank president Dr TV Naranya of the Indian Pharmaceutical Association and its other distinguished officers for being #WPD2022 Champions. Many events were held across India for WPD and World Pharmacy Week!

The Indonesian Pharmacists Association (IAI) coordinated numerous celebrations across the country, which were reported on by television stations. Events included:

Ordre National des Pharmaciens de Madagascar raised awareness of the various roles of pharmacists with the public at Antaninarenina Garden in the capital city. The event included speaking with young people and educating the public on the importance of getting medicines from reliable sources. In addition, there was blood donation and a vaccination drive.

In addition to the World Pharmacists Day Celebration 2022 organised by the Malaysian Pharmacists Society (MPS) Young Pharmacists Chapter in collaboration with the Malaysian Pharmacy Students' Association (MyPSA), the MPS launched a video competition called “My Little Pharmacist”, which was covered by national television, in which children were educated on the role of the pharmacist. The society also used the day to encourage call on Malaysia’s pharmacists to join it.

The Philippine Pharmacists Association championed #WPD2022 with its president Gilda Sebua-Saljay recording a message to Filipino pharmacists against the backdrop of FIP’s 80th World Congress of Pharmacy and Pharmaceutical Sciences in Seville. “It feels great to be with other pharmacists from different parts of the globe, in one venue, sharing challenges and best practices,” she said as she played tribute to Filipino pharmacists for their contribution to a healthier world and especially through providing vaccinations. The association created a Twibbon for its members and its branches organised a number of activities.

The General Pharmaceutical Council of Spain used the occasion of World Pharmacists Day to advocate pharmacy to ministers at the Parliament of Andalusia in Seville. At the event, the GPCS officially declared its joining of the World Pharmacists Day campaign and made a renewed commitment to the health of patients on behalf of Spanish Pharmacists.

The Pharmaceutical Society of Tanzania organised a demonstration held at the University of Health and Allied Sciences, Muhimbili.

The Pharmaceutical Society of Thailand invited the profession to join World Pharmacist Day and World Pharmacy Week events focusing on challenges and opportunities for pharmacy in pandemic era. It also adapted FIP WPD campaign materials into Thai posters and ensured that the 2022 message was shared by the National News Bureau.

The Syndicate of Community Pharmacy Owners, in collaboration with the pharmacy department at Al-Saeda University in Sanna, marked WPD 2022 by highlighting the importance of the pharmacy profession and the role of the pharmacist to ensure the quality and safe use of medicines with a large gathering of pharmacists and academics, led by Dr Mohamed Al-nuzili, president of the syndicate. The event was held under the slogan “united for better community health and better reality for pharmacists”. 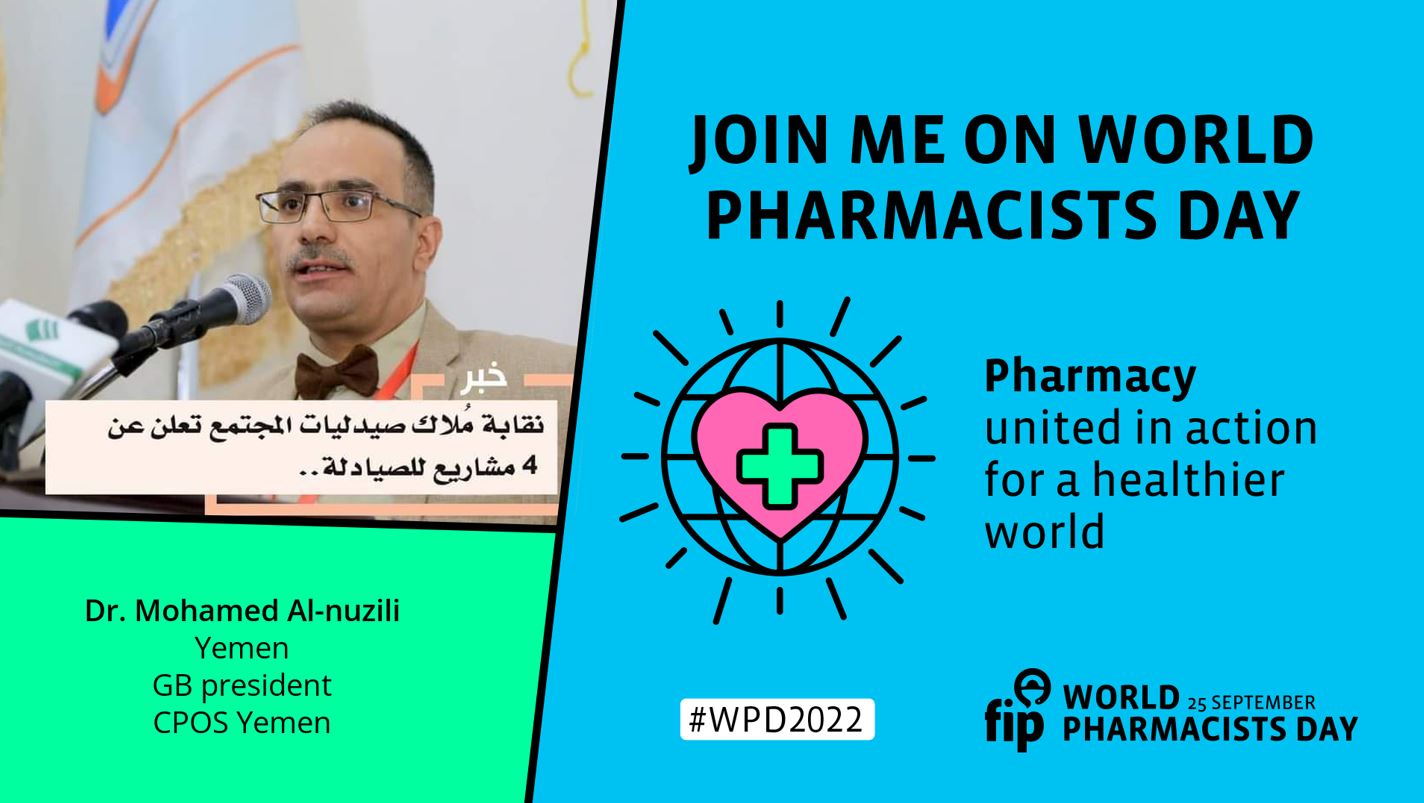 The theme of World Pharmacists Day 2023 will be announced in March 2023. Follow FIP on social media for news.